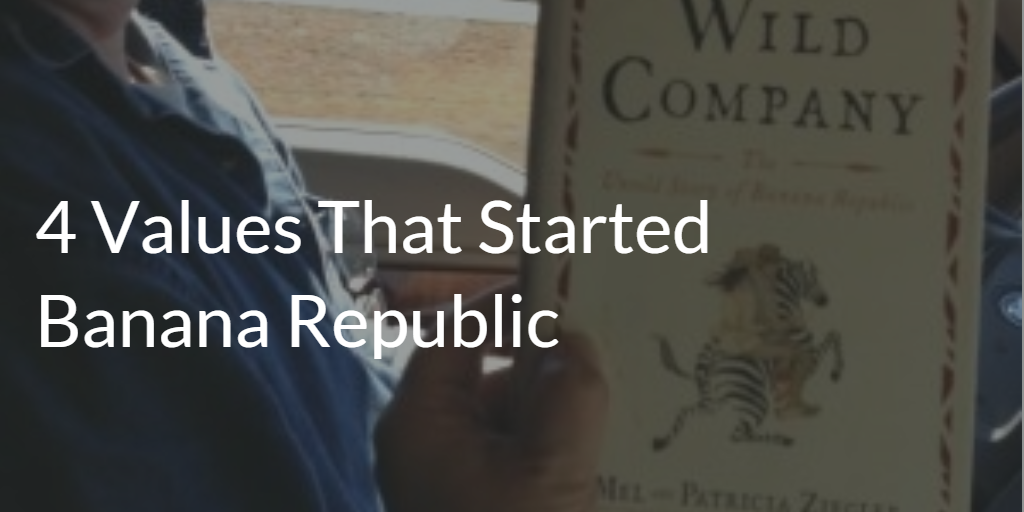 As Robert and I travel, we like to share and talk about books. (If you didn’t know – Robert and I are traveling full-time as he speaks with HR professionals and other leaders about values in business all over the USA in 2015. You can learn more here.)

Our latest book is from our son – it’s become our out-loud conversational topic as we drive in February & March. 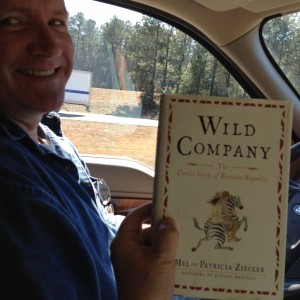 Wild Company is about the founders  – Mel & Patricia Ziegler – of this extremely successful retail business in the 1980’s: Banana Republic.

I recently read a terrific book about the early days of Banana Republic. The founders of this extremely successful retail business – Mel & Patricia Ziegler – wrote a book called Wild Company: The Untold Story of Banana Republic

It’s a wild ride into the lives of a husband and wife team that left their creative careers as a writer and an artist to enter a business they knew nothing about. With their life-savings of $1,500, and a desire to start a business, they decided to buy military surplus clothing – beginning with Spanish Army shirts – and open a store in San Francisco, CA

It was 1978. And Mel & Patricia Ziegler were selling used clothing – with a twist. It was more about the story than the clothes.

Of course, to continue operations, the Zieglers needed additional funding. Except they couldn’t get a loan from any bank (they had no capital or collateral). So they leveraged the power of “payment terms” with suppliers. With a little bit of crafty work, they managed to obtain 30-day terms from two suppliers of surplus clothing. As long as they sold enough merchandise within 30 days, they could pay their bills, and then buy more surplus.

The audacity of this dynamic duo was mind-blowing.

Near the very beginning of the book, Patricia Ziegler points to 4 values that define what matters most to her: Character; Adventure; Heritage; Independence These values can easily been seen in the original Banana Republic, and what defined it’s early success.

In 1983, The Gap, Inc. offered to buy Banana Republic, but leave the Zieglers in charge of continuing their vision and preserving their values – along with access to The Gap’s significant resources. Remaining true to their 4 values, the Zieglers led an expansion of Banana Republic beyond just new store openings. They opened up America to a whole new retail experience. Here are just a few examples of how their values worked for them as they expanded.

A Shift in Values

Sadly, the adventure did not last. In 1988, Mel & Patricia Ziegler left Banana Republic as the Gap’s senior managers shifted from hands-off to being very hands-on. Suddenly there was a clear difference in values. Not surprisingly, Gap shifted the culture and customer experience to a completely different direction, now a mainstream luxury clothing retailer. The Banana Republic of today bares no resemblance to the culture and experience that existed in the early years.

Regardless of your take on the shift in retail strategy, I encourage you to read the book Wild Company

What’s your take on Banana Republic’s original values and how they applied them?