An Important Leadership Lesson From The World Series 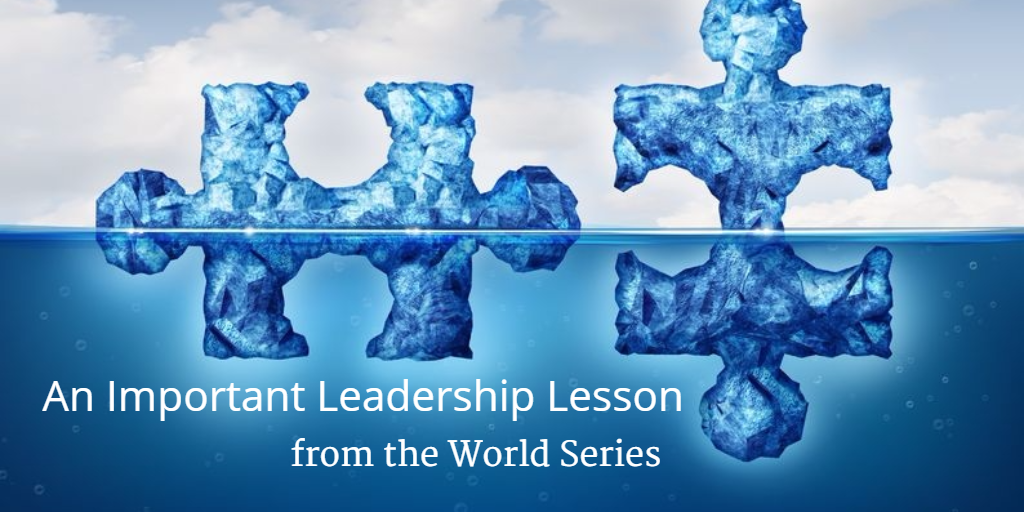 I enjoy watching championship games, where the best-of-the-best play at the top of their game. Why?

Often there are important leadership lessons which can translate to every part of life –  if you look closely.

Leadership Lesson in the 2015 World Series

This year’s World Series – between the Kansas City Royals and the New York Mets – at the end of the fifth and final game, did not disappoint. It provided an important leadership lesson.

The Royals had already won 3 games and the Mets had only won 1. The Mets needed to win this fifth game to stay in the series.

I tuned in to the game late. It was the 8th inning. The Mets, playing on their home turf, were winning 2 to 0. The crowd was electric, chanting the name of the Mets star pitcher: “Har-vey! Har-vey!”

Matt Harvey had pitched the entire game, holding back the Royals from scoring anything. If the Mets could hold this score, and win the game, Harvey was clearly destined for greatness.

Now the big question: Who would pitch the ninth inning?

The commentators announced that Terry Collins, the Mets manager, would surely make a switch. Pitchers get tired. There’s a natural rotation. It’s how the game works. And coaches also need to protect the young arms of their key players. It’s the reason most teams have restrictive inning limits.

Also, at this specific point in the game, Matt Harvey had pitched a total of 216 innings (combined regular and postseason) – an amazing feat, and a personal career high. So it was obvious to every good coach – including Terry Collins – that it was time to bring in a fresh pitcher to finish the ninth inning.

But Harvey wanted to pitch the ninth inning.

It was visibly evident he wanted this more than anything else.

Maybe it was the chanting crowd. Or maybe it was pure hubris. But Harvey felt that HE should finish the game. In fact, he felt so strongly about it that he approached Collins in the dugout and demanded he be allowed to finish the game.

This was THE leadership moment for Terry Collins. His decision could make or break the game, and Harvey’s career.

What would Collins do?

The significance of this one decision was so evident, that even the commentators highlighted this fact. They said it would forever be discussed in baseball history.

In those few moments of consideration, Collins had four possible scenarios:

So Harvey was taking a huge personal risk to demand he be allowed to pitch the ninth inning. He was so focused on being the one to lead the win that he failed to see the all the risks.

That’s the job of the leader.

Seeing the risks – especially in a tense moment – is the job of the leader. #leadership

One of the most important responsibilities a leader has is to protect their people. Sometimes that even means protecting their people from themselves.

If Collins had taken the time to ponder over these scenarios, he would have known that the better scenarios were #3 or #4. Either one would have provided the best future options for Matt Harvey’s personal career, without sacrificing the needs of the team.

Protecting your people – even from themselves – is the job of a leader. #leadership

So what was the outcome?

Sadly, Collins acquiesced to Harvey’s demand, and let him beginning pitching the ninth inning. The results were disastrous. The final outcome was the Royals winning 7 to 2 – and the World Series.

Collins had unknowingly selected scenario #2. And it didn’t take long for him to recognize his mistake. In a post-game commentary, Collins openly stated: “It was my fault. That’s inexcusable, for me.”

Both Collins and Harvey learned a hard lesson that day.

Protect your people by sticking to what you know is right, regardless of the pressures of the moment, even if the pressure comes from your best players.

Protect your people. Stick to what you know is right, even when under pressure. #leadershiplesson